The Toronto West Detention Centre, often referred to as simply The West, is a maximum-security remand facility located in Rexdale, a community located in the north-west corner of Toronto, Ontario, Canada. The facility was known as the Metropolitan Toronto West Detention Centre until Rexdale, as part of the City of Etobicoke, became part of the newly amalgamated City of Toronto in 1998.

With a designed capacity for 631 prisoners, the Toronto West Detention Centre currently houses adult males who have been remanded into custody while awaiting trial or sentencing, are serving short sentences, or are awaiting transfer to federal or provincial correctional facilities. Over the years the Toronto West Detention Centre has at times also housed female and juvenile offenders. From October 1997 through January 1999 the facility underwent extensive retrofitting of its security systems using up-to-date technology. The facility has also housed foreign nationals being detained on security certificates.

In January 2008, staff at the prison staged a walk out in protest of three correctional officers being disciplined for failing to notice actions later seen on security cameras.

Canada Relink Call2Talk is the most efficient and cheapest method to receive calls from Provincial prisons such as The Toronto West Detention Centre. Whenever a Toronto West Prison inmate calls a local number, they are charged $0.075 per minute from their collect Calling Canada Relink Call2Talk account. The same inmate call that would have cost upwards of $5.00 now just costs you $1.13 for 15 minutes.

We will provide you with a local telephone number for collect calls, near the West Jail, for your inmate to call as if it were your original home, work or mobile number. When the inmate calls the local Collect Call number that we issue, we will route the call to your current or any other telephone number without alteration to your existing line. Only two things change in the way you will receive prison telephone calls from Toronto; the telephone number your inmate dials and the new lower cost of prison calling.

With Canada Relink Call2Talk, inmates in The Toronto West Detention Centre will save more than 80% on their prison telephone calls. **Local Rate Centre is Toronto** 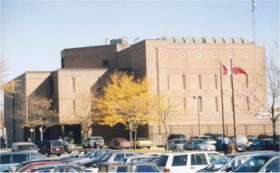