Maplehurst Correctional Complex (also known colloquially as the Milton Hilton) is a correctional facility located in Milton, Ontario for males 18 years of age and older. It is a combined maximum security detention centre for remanded prisoners, and medium/maximum correctional centre for offenders sentenced to less than two years. Maplehurst Correctional Complex was built in the mid 1970s as a replacement for several older facilities including the Milton Jail, Halton County Jail, and the Mimico Correctional Centre, although the latter ultimately remained open. It was expanded in the late 1980s and again in the early 21st century.

At the official opening of the $89 million modernization in 2001, the Ontario government described the complex as the first facility in Ontario’s correctional system to feature a new design with pods: self-contained, 192-bed units where inmates spend their day – including program areas and an outdoor space for exercise. The complex is the size of 100 football fields and was the first of so-called “super-jails” in Ontario. General Population, Protective Population and Segregation/Hospital units are all housed within the facility. It shares its location with the adjacent Vanier Centre for Women, a 333-bed medium and maximum security facility for remanded and sentenced female offenders.

Canada Relink Call2Talk is the most efficient and cheapest method to receive calls from Provincial prisons such as Maplehurst Correctional Complex. Whenever a Maplehurst Prison inmate calls a local number, they are charged $0.075 per minute from their collect Calling Canada Relink Call2Talk account. The same inmate call that would have cost upwards of $5.00 now just costs you $1.13 for 15 minutes.

We will provide you with a local telephone number for collect calls, near the Milton Jail, for your inmate to call as if it were your original home, work or mobile number. When the inmate calls the local Collect Call number that we issue, we will route the call to your current or any other telephone number without alteration to your existing line. Only two things change in the way you will receive prison telephone calls from Milton; the telephone number your inmate dials and the new lower cost of prison calling.

With Canada Relink Call2Talk, inmates in Maplehurst Correctional Complex, Milton will save more than 80% on their prison telephone calls. **Local Rate Centre is Toronto** 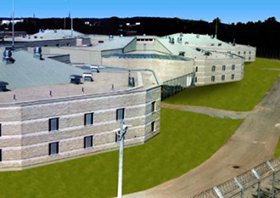